Go Slow to Go Fast: My Common Humanity with An Excavating Crew 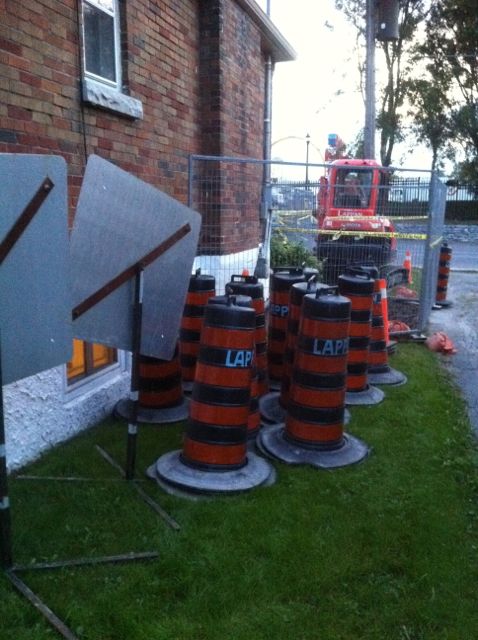 Let me begin with the introduction of some terms: spool (not the kind for thread), water box, elevation, drop, a “y”, underground services, mains, laterals, hydraulic…. Earlier this month, I faced an emergency of sorts when the sewer drain outside my home became completely clogged and damaged by tree roots.

This was an unexpected and vastly consuming situation, a problem I was unaware of but had clearly been developing for a long time until it reached some tipping point and then, voila! — no water was leaving the house and the pipes were making anxiety-provoking sounds that led to one virtually sleepless night. Thankfully, good luck with respect to timing and an amazing excavating company and crew helped me. (Thank you! Thank you!) I learned a lot, was fascinated, met new people, was exposed to a whole new universe of terminology and things. It was enriching. I met the supervisor of underground services for my city. Imagine having his occupational title, being asked at a party, “…and what do you do?”. “Well, I’m the supervisor of underground services.” The term has such intrigue.

On Day One–the day when the clogged sewer was rescued and a temporary fix was put into place–the excavating manager said to the crew, “Remember, go slow to go fast”. I felt immediate resonance to this advice. I shared with the crew: “This makes total sense to me. When I worked as a crisis counsellor, which involved meeting people who are generally very distressed and where we usually have only a limited (sometime very short) amount of time together, I developed what became a personal guiding philosophy: “Go slow, hone in”.”

People need spaciousness. People who are in distress need room. I want to be as honouring as possible, as spacious as possible in my presence, to give people a sense that there is room and time–and at the same time, I want to try to hone in, try to help alleviate some of the acute constriction or terror or distress by honing in, perhaps helping to problem-solve or provide options, reassurance that there are options, to try to develop some kind of a plan, maybe a framework that helps people have something to hold onto. In the excavating world, going fast can result in disaster–hitting a gas line or a water line or a massive rock. In the counseling world, going too fast, even when time is limited, can sometimes result in losing the person, or not listening quite enough or missing the boat in some way.

I said to my excavating company, “We have a lot in common!” On that note, here’s another phrase I’ll introduce: common humanity. This is a component of self-compassion that Kristin Neff writes about (among others)–a topic for another post.

October Photographs, Reflections, and Link to a Guided Meditation

What Wants to Shine Back?

Caring for the earth is caring for each other