For my German speaking and reading visitors:

Thomas Heinsius and Mirjam Tanner have just started a website on compassion in German to disseminate information on compassion-focused therapy and compassion-based psychotherapeutic work in German speaking countries. END_OF_DOCUMENT_TOKEN_TO_BE_REPLACED

Recently, I read the book Tattoos on the Heart: The Power of Boundless Compassion by Gregory Boyle (2010, Free Press). I do not remember how I learned of the book (I am thinking it may have been a library search) but for whichever way it came across my path, I’m glad that it did.

Gregory’s writing is filled with insights I could spend the next decade (if not the rest of my life) reflecting on and trying to live by and inspire. He is an ordained Jesuit Priest who worked for 20 years in the Boyle Heights of Los Angeles: END_OF_DOCUMENT_TOKEN_TO_BE_REPLACED 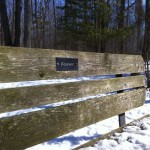 I imagine that the Forever inscribed and placed on this bench refers to the love and bond someone (or a group) has with another who is no longer living– a bond that will last forever. Encountering this bench made me feel quiet, and it made me also reflect on other bonds that we have and other commitments. END_OF_DOCUMENT_TOKEN_TO_BE_REPLACED

Today I would like to share a quote from a wonderful little book I read in the fall by Jon Kabat-Zinn called Arriving at Your Own Door: 108 Lessons in Mindfulness. END_OF_DOCUMENT_TOKEN_TO_BE_REPLACED

Today I watched the talk “How Economic Inequality Harms Societies” given by Richard Wilkinson at TED.com and I wanted to share it. The presenter speaks of the compelling relationship between the degree of income disparity in a country and the degree of health of the individuals who live there. Over and over again, the findings suggest that the greater the disparity, the poorer will be all the people’s health in that country, including people’s mental health. END_OF_DOCUMENT_TOKEN_TO_BE_REPLACED

Sitting on my counter for the past while has been a beautiful, locally, lovingly, organically grown baking pumpkin. This weekend, it was time to use it, and I opted to make gluten-free pumpkin muffins. One of the first steps, after washing it, was to cut the pumpkin open. Trials with five separate knives later, mission was accomplished.

Let me begin with the introduction of some terms: spool (not the kind for thread), water box, elevation, drop, a “y”, underground services, mains, laterals, hydraulic…. Earlier this month, I faced an emergency of sorts when the sewer drain outside my home became completely clogged and damaged by tree roots.

This was an unexpected and vastly consuming situation, a problem I was unaware of but had clearly been developing for a long time until it reached some tipping point and then, voila! END_OF_DOCUMENT_TOKEN_TO_BE_REPLACED

He accepted–really accepted whole-heartedly–that he was angry and jealous, that he resisted and struggled, and that he was afraid. He accepted that he was also precious beyond measure–wise and foolish, rich and poor, and totally unfathomable. He felt so much gratitude that in the total darkness he stood up, walked toward the snake [a source of great fear], and bowed.
–Pema Chodron, When Things Fall Apart, p. 5; [square bracket text added by Tracy]

I believe concepts of self-compassion and emotion regulation are closely related. One aspect that can be found in both is the intention and action of honouring. END_OF_DOCUMENT_TOKEN_TO_BE_REPLACED